GOOD NEWS! The recording studios now a reality. A work team consisting of Electronic Engineer Wayne Borthwick, Project Director Ray Rising along with 4 others have arrived home after completing, not only the interior of the sound studio, but also the recording equipment and associated gear.
This means the studio can be used by the men and ladies that have been trained to operate the facility for the production of scripture for many different language groups that can currently hear the signal of Radio Logos. We rejoice that God has answered many many prayers to get this beautiful studio to get the scripture, stories, and music that is so effectively used on the air. Much rejoicing is happening in the Local Congregation of believers that have prayed and worked so hard to make this a reality.

We praise the Lord and Thank Him for all the donations and hard work for so many -some we may never meet -that this is now an operational studio for God's work. The fields are white to harvest with the Holy Spirit touching many hundreds and thousands of individuals and language groups.

Further the transmitter building is the recipient of better air conditioning which mandated the conversion from single phase power to 3-phase which we pray will be more stable and consistent to provide continuous transmitter operation.

The comment from Mr. Rising was "they have a beautiful studio now". Praise the Lord!

The Chazuta Transmitter has been repaired and is On The Air as of 1/24/2013, Praise the Lord. The engineers found several problems stemming from power surges. An extra filter has been installed to assure this will not happen again, Thank You to all who have prayed to get the transmitter repaired and those who donated financially to this project along with the engineering team to rework and install new modules.
A number of villages have been calling asking "why is the station not on the air". The people have missed it greatly. This is a vital link to having good evangelical programming to so many needing and wanting sound teaching.
More support by donations of laptop computers, financial support to train more people to produce programs in more languages.
Pastor Jairo and the congregation in Chazuta have a great passion to reach all the language groups in range of this short wave station. Many more people are needed to be trained to expertly produce these programs.
The satellite dish link to HCJB still needs to be installed and made operational to allow programs already produced by HCJB to be downloaded via satellite for broadcast. HCJB has assisted in many ways to allow this station to be operational. We are so encouraged for their support.

Would you church consider becoming a "Sister Church" to the Chazuta Conregation in supporting Radio Logos? This Partnership is needed for encouragement, financial, prayer, and spiritual encouragement. The evil one has tried all kinds of ways to prevent these broadcasts from becoming a reality. If you have any interest please contact us for more details.

Radio Logos is broadcasting from Chazuta Peru on 4810 SW with listener reports from Sweden, Illinois, New York, and California. These reports demonstrate the far reaching effects of this media.
Many language groups can and are receiving this station signal in their own language and dialect. A more complete report is on the Project AMG Chazuta Radio. See the menu on the top left side this page.
-o- 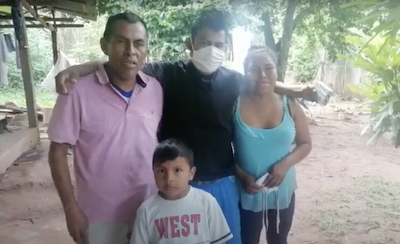 For Tax Deductible Receipts send your Donations to:

PayPal is an easy and quick way to donate today. If you wish to send a check mail to Ethno Media Associates directly.

Your Donation will be receipted by Ethno Media Associates.

Thank you for your kindness and generosity to make it possible many different language groups hear the broadcasts in their own dialect through the Ministry of Ethnic Radio. God bless you!